The Mitzva of Writing Your Own Sefer Torah

The very last commandment of the Torah, number 613, is the obligation of every Jew to write a Sefer Torah to himself. That's right, every Jew. You probably know very few individuals who actually did this and there are many reasons why this Miztva is not so widespread.

First, Maimonides says, quoting the Talmud: "Every Jew must write a Sefer Torah (...). If he writes it himself, it's like he has received the Torah from Mount Sinai; if he however doesn't knows how to write it, others may write on his behalf" (source). In fact the Rambam wrote a Torah for himself, as he states in Hilchot Sefer Torah: " (...) I have relied on it in the Torah Scroll that I wrote according to the Halakha".

The Rambam is not the only well-known personality who fulfilled this Miztva with his own hands. The first person to do it was Moshe Rabbeinu, who according to our tradition wrote thirteen (one for each tribe plus one extra for verification purposes) Sifrei Torah in the day he died. Other famous sofrim include Ezra, (400 b.c.e.), Rabbi Meir, (2nd century), the famous masorete Aharon Ben Asher (9th century), the Meiri, Avraham Sofer (1800's) and many others.

Over the centuries, many Sifrei Torah were written but, expectably, very few survived the test of time. Countless were burnt in the various pogroms and persecutions Jews suffered throughout the ages, but we do have a few scrolls that are almost one thousand years old.


The most notable example is the ספר תורה that the Ran, or Rabbeinu Nissim of Gironda (1320-1380), wrote for himself. One of the most revered Rishonim and the Gadol of his time, the Ran wrote a beautiful scroll in Gvil that is still intact, housed in the National Library of the Hebrew University. This scroll is not displayed in public, although I have a friend who saw it a few years ago in a special exhibition in the National Library. In my visit to Hebrew University just last month, I saw a "duplicate" of this Torah which looks exactly like the original and you can see my snapshots below.

Another famous Rabbi who wrote his own Torah is Rabbi Yitzchak Abuhav of Toledo (1300's) and this scroll is still in use today in Tzfat, in the city's famous Kabbalistic Abuhav Synagogue (read the legendary story here).

Today, some Jews write their own Sefer Torah, either via a hired scribe or rarely, by themselves. Most of the Sifrei Torah sold today go to communities who need it for the communal services, but such purchases are "public" and the nature of this Mitzva is that every individual should have a Sefer Torah for himself. The community's scroll for the weekly Torah reading is not part of this Mitzva, to the extent that an individual will lose this Miztva if he writes a Torah for himself but later relinquishes it to the Shul without any explicit condition of retrieving it back.


So why so few Jews fulfill this Mitzva?

Firstly, the reason why 99.9% of the Jews don't write a Sefer Torah by their own hand is simply because is really hard to do it. This requires a great deal of time, will, skill and patience. But why most Jews don't hire scribes to do the work for them?

The most obvious reason a financial one. It's really expensive to hire a good סופר and a Torah could cost up to U$50,000, a figure that is too high for most of us. But there's also an Halachic loophole.

The Rosh (Rabbeinu Asher, 1259 – 1328) writes that a Jew can fulfill this Mitzva by buying a Chumash, Talmud or any other Torah book. According to this, it would seem that you can fulfill this mitzva by buying any Feldheim or Artscroll book, which many of us posses anyways. But there is a discussion on how to interpret this Rosh. Some say go so far to say that there is no Miztva to write a Sefer Torah today (an opinion that is very hard to understand, as no one can annul any Mitzva of the Torah), while some say he was merely saying that in addition to writing your Sefer Torah you can fulfill this Mitzva in another way - by purchasing Torah books.

So if you take the financial issue added to this Halachic loophole, it understandable why most Jews don't write Sefer Torahs - they feel like they do fulfill the Miztva in some way by buying books and learning them.

I also note that in the Rosh's time, there was no printing press and a Chumash was in fact very similar to a Torah Scroll - a person who wanted it had to buy it or commission it from a scribe, who would have written it by hand. So I can understand that in the Rosh's mind there was a lot in common between buying a Torah Scroll or buying a Chumash at that time. The only difference was the Halachot of Stam, which a Sofer must observe when writing a scroll. But I'm not sure the Rosh was comparing writing a Sefer Torah to swiping your credit card in the local Judaica shop and buying the latest Artscroll Chumash in print, so perhaps the Halachic loophole is not as big as people assume it to be.

Other commentators bring the argument that we are not proficient in the exact spelling of the Torah's text (Chaseiros and Yeteirot) and therefore we can't fulfill the Mitzva properly in our days.

However, most authorities are not willing to subscribe to the notion that the Mitzva of writing a Sefer Torah is not applicable anymore, and thet assert that the best way to fulfill this Miztva is indeed by writing a Sefer Torah yourself or via a hired scribe. I'm planning to start writing my own Sefer Torah soon, although this project will likely take a few years. But if the Ran, Rabbi Abuhab had the time to do it, why not me? 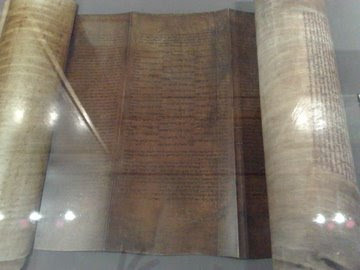 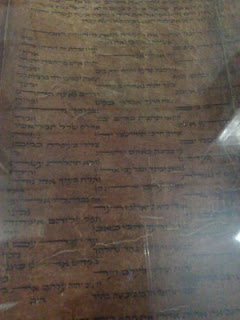 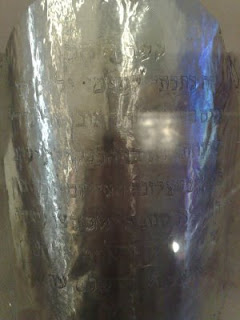 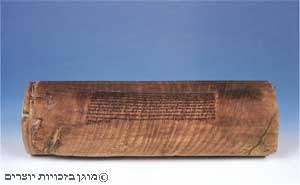 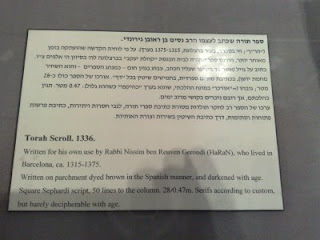 Left: Account of the whereabout of this scroll, written by the Ran's son in the outer side of the scroll. See transcript of this revealing short story here.
Right: Explanation note from Hebrew University