It's fascinating to see so many important books being auctioned lately, with top dollar hammer prices.

What really got my attention is this Torah of c. 1270, in good condition, which actually sold for the lowest estimate - 310,000usd. Check here for more details.

What is interesting to see is the many alterations that clearly were added by later hands - erasure of Peh Lefufa, adding of Shaatnez Getz tagin and others. 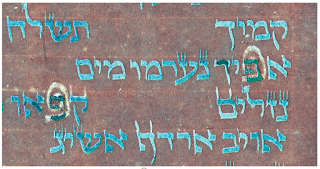 Also, it's interesting to see how much the Sofer had to stretch the letters in order to conform with the Vavei Amudim layout - something later authorities advised to avoid. 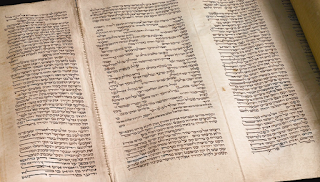 Daf Yomi Insights: Lot, His Daughters and the Dots on top of the letters of the Torah

The Talmud in Nazir 23a discusses the story of Lot and his daughters, who fled the destruction of Sodom and were alone in a cave, thinking they were the world's sole survivors. In the first night his older daughter cohabitated with him after giving him wine, and in the next night, his younger daughter. Look at the Pasuk:

It´s pretty clear that the Torah is saying the Lot did not know of what happened, nor before or after the episode. Now the Talmud makes a really puzzling commentary; while noting that the word ובקומה has a unique scribal oddity of having a dot over the letter Hey, this oddity gives a whole different meaning to the passage:

The Talmud is saying that Lot knew about what happened after the first daughter stood up - and he did nothing to prevent a repetition in the second night. Now that's the exact opposite of the plain reading of the Torah - the Torah clearly states he did not know of what happened before AND afterwards. How can the Talmud spin the reading against what's actually stated in the Torah?

This is a very strong question and it almost makes us wonder if we are missing something. We are.

The scribal oddity addressed here is found in rare occasions in the Torah. The famous oddities of Inverted Nuns, or special Tagim (we discussed these oddities in an older post) are unlike this oddity. The Dots over Letters is a much older tradition and it actually dates all the way back to Ezra the Scribe, who saved the Torah from oblivion when he brought the Jews to Israel in 457 BCE. In Ezra's time, the Jews almost forgot many of the teachings of the Torah and he singlehandedly took upon himself to set the correct text of the Torah for generations to come. But he was not always certain about the correct text. The Avot of Rabbi Natan, a Gaonic early work often quoted by the Tosafists, quotes (here, in Perek Hey) all the words that are dotted in the Torah and then he explains the backstory:
למה, אלא כך אמר עזרא: אם יבא אליהו ויאמר לי מפני מה כתבת כך, אומר אני לו: כבר נקדתי עליהן. ואם אומר לי יפה כתבת, אעביר נקודה מעליהן.
'Why (are the letters dotted)? Ezra said: if Elijah comes and asks why I wrote these words, I can answer that I dotted these. If he tells me that it's good I wrote them, then I can just erase the dots'

It's clear that Ezra was unsure about the correct Mesora, and in some places he was unsure to write or not to write an extra word. For instance, in the story of Lot, he was unsure if the word ובקומה should be written or not - and writing it (or not), would cause a completely different reading of the passage. If he wrote it, it would mean that Lot did not know about what happened at all, but not writing it would mean that he knew what happened after the firstborn left.

Therefore Ezra decided to write ובקומה and leave both readings as a possibility. If Elijah comes and asks 'why did you write it', he can counter that there is a dot over the word and that signifies that it's a word that maybe should be erased.

I saw this beautiful picture the other day of an artist illuminating a Megillah. Enjoy 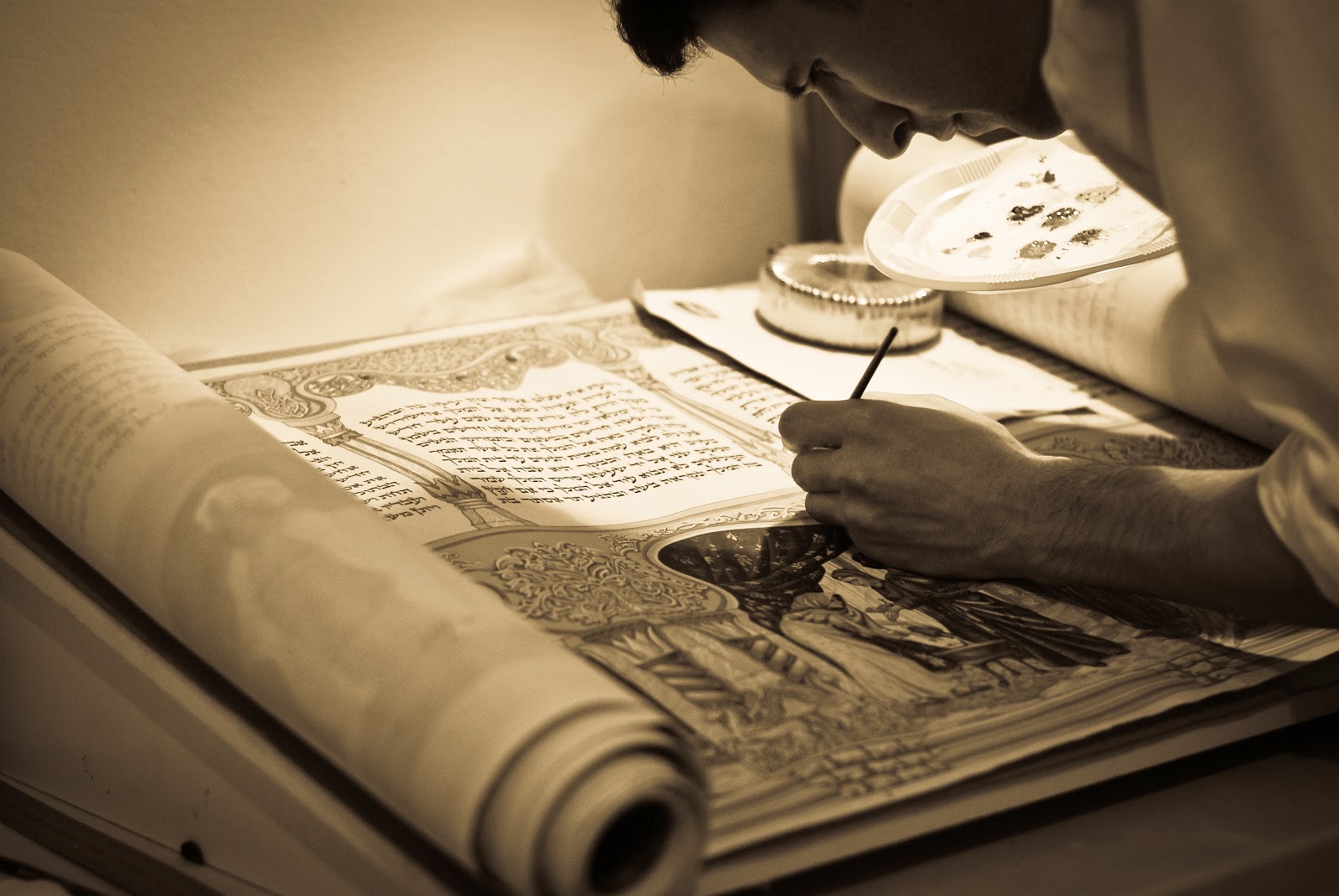 As part of project to memoralize Jews who disappeared in Holocaust, remarkable discovery made on doorpost in Przemysl. Mezuzah (illustration)
Noam Moskowitz/Flash 90
A unique discovery was made last week in the Polish town of Przemysl, as a 70-year-old mezuzah scroll was discovered in excellent condition as part of a national initiative to identify homes whose former Jewish owners disappeared in the Holocaust.
As part of the project, doorways featuring mezuzah niches bearingwitness to the Jewish families who lived there prior to the Holocaust are marked with a certain color to commemorate the former Jewish residents - all with the permission of the current residents.
Resident Hanna Merlak provided information about the remarkable mezuzah discovery in Przemysl last week according to Virtual Shtetl, after she saw a flat piece of metal mounted diagonally on the home's doorway at Wladycze Street.
Merlak suspected that under the metal other remnants of the mezuzah were concealed, and with permission nails were removed in taking down the metal and revealing the mezuzah niche underneath, which still contained parts of the mezuzah and an intact scroll.
The 70-year-old mezuzah was brought to the Jewish community in Warsaw, and after being inspected it was found to be in a condition allowing usage according to Jewish law. Currently the Jewish residents who owned the home are being searched for.
Helena Czernek and Aleksander Prugar of the Mi Polin studio specializing in Jewish art were involved in the recovery of the mezuzah.
"The parchment seems to be perfectly preserved," said Czernek. "It has been taken care of by experts on the preservation of monuments of history from the National Museum in Warsaw. We will decide together what to do with that precious piece of Jewish ceremonial art."
Mi Polin studio has been preparing an exhibit of mezuzahs, featuring casts of mezuzahs left from before the Holocaust along with information about the Jewish residents who are thought to have lived in the homes.
Posted by YK at 4:55 PM No comments: