In my previous post I wrote about Sotheby's Sefer Torah auction, which pocketed 398,500 (the estimate was 300,000 to 500,000). But there were a few interesting Megillot being auctioned as well and I singled out three of them.

Firstly, the allegedly "earliest complete decorated Esther Scroll" (Venice, 1562). It was sold for a whooping U$ 600,000, making it the most expensive item sold in Sotheby's auction. I personally cannot understand why would someone favor this Megilla over the above-mentioned Sefer Torah from the 13th century, but bottom line is that this Megilla is surely unique. Every column starts with only one, large-type, word and subsequent 22 lines. From a Safrut perspective these top large words are not desirable but it doesn't causes the scroll to become Pasul. (click in the image to enlarge)

Next is a magnificent Megilla from Prague, 1700's, decorated by Jean-Paul Franck. From the catalogue: "Additionally, nude, half-length female figures emerge from scrolling foliate vines and peacocks, perched in naturalistic poses create a theatrical, albeit unrelated, backdrop to the Hebrew text." This is odd but not uncommon in old Megillot, unfortunately. Sold for U$ 134,500. 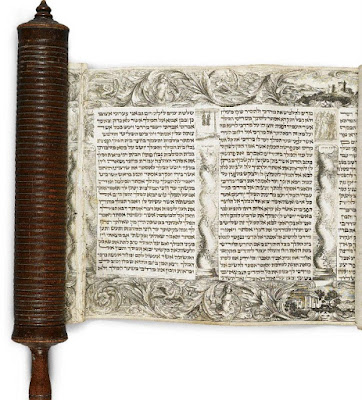 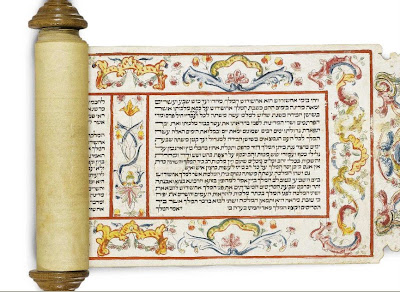 Menachem Butler pointed me to Sotheby's Important Judaica auction which will take place in just a few days. One of the Auction's highlights is a complete Spanish Sefer Torah from the 13th century and in Sotheby's catalogue there's a very interesting write-up detaling the origin and the style of this Torah. For Safrut fans, this is a delightful read that expounds the sources and Minhagim of writing the extra Taguim in Torah Scrolls, as per the ancient Sefer Hataguim. 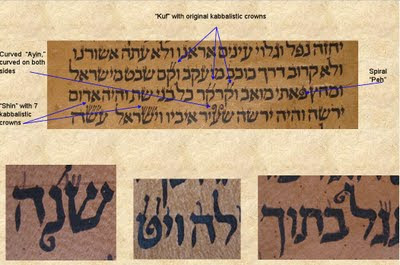 One of the key traits of this Sefer is the fact that it didn't originally have the Taguim in all Shatnez Getz letters thorought the scroll but a later scribe added these taguim, in conformity with the present day Minhag. The original Sofer followed the opinion of the Rambam, which holds that only Mezuzot need Taguim in all Shaatnez Getz letters, and the later Sofer added them because over time all Bnei Israel started to use the Shaatnez Getz taguim in Torah Scrolls. 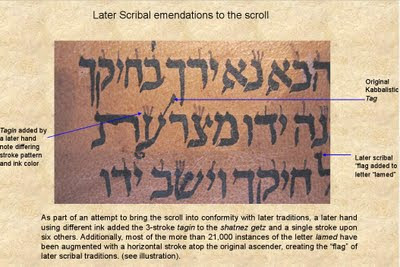 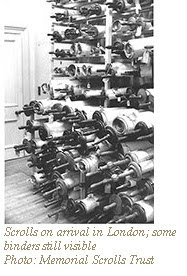 I just came back from a short trip to Prague, one of the most beautiful cities of Europe. One of the main attractions of the city is it's ancient Jewish Quarter and while visiting it, I got familiar with a truly fantastic story - the story of the over 1800 Torah Scrolls that somehow survived the Holocaust.

"In 1942, a group of members of Prague’s Jewish Community devised a way to bring the religious treasures from the deserted provincial communities to the comparative safety of Prague. The Nazis were persuaded to accept this plan and more than 100,000 items were sent to the Museum.

Among them were about 1,800 Torah Scrolls. Each was meticulously recorded on a card index by the Museum’s staff with a description of the Scroll and the place from which it came. The legend that there was a Nazi plan to create a ‘museum to an extinct race’ in Prague has never been proved. Be it as it may, these scrolls were left untouched by the Nazis but were abandoned for many years.

Under the Communist regime, the Torah Scrolls were accumulated in the abandoned Michle Synagogue in a suburb of Prague, and here it was that Eric Estorick, a London art dealer, was shown the collection in 1963. At the behest of his friend and client, philanthropist Ralph Yablon, and Rabbi Dr Harold Reinhart, he negotiated with the Communist state authorities to bring this precious collection of 1564 Torah Scrolls to Westminster Synagogue in 1964."

The Westminster Synagogue distributed the scrolls to communities around the world and the oldest Sefer Torah, dating back to 1650, is reportedly housed in Temple Havurat Emet in Arizona.

As you can imagine, this collective group of Sifrei Torah is invaluable. Very few Sifrei Torahs survived the Holocaust and, as I noted previously, many old Mesorot were completely forgotten after the war. If a trained Sofer went through the Czech Torahs in detail, I have no doubt that he would come across many of the forgotten Mesorot, like the Otiot Meshunot for example.

It turns out that one person handled all the scrolls and did all the necessary fixes himself. That's David Brand, an orthodox Sofer who spent 27 years of his life looking at these precious scrolls. I don't think any other Sofer has seen as many pre-war Torah Scrolls as him and I started a man-hunt after him. But as I began looking, I found this note in the Czech Memorial Trust's website:

"The arrival at Kent House of David Brand, the Trust’s only resident sofer (scribe), has passed into legend. The story has often been told of the knock on the front door of the synagogue, Ruth Shaffer’s reception of an elderly Orthodox Jew who asked in Yiddish, ‘Do you have any Torahs to repair? And her reply, ‘We have 1,564; come in!’. The friendship and respect between David Brand and the modern forward-thinking Reform Rabbi Harold Reinhart laid the foundation of the whole Scroll story.

David Eliahu Brand was strictly Orthodox in his approach to Judaism. He would not partake of any food or drink at Westminster Synagogue, bringing his own refreshment and staying in London in a small flat found for him by Rabbi Reinhart. When introduced to the Lady Mayor of Westminster on the occasion of the opening of the Scrolls Centre in 1988, he would not take her hand in greeting, explaining with dignity that his religion did not allow it.

When he returned to Jerusalem – the work being nearly complete – he kept in touch for a while, returning from time to time on special visits. Sadly, the Trust has now lost touch with him but if anyone knows the whereabouts of this charming, friendly, knowledgeable man of much distinction, the Trust would be delighted to have the information."

So if anyone knows this David Brand, please let me (and the Trust) know!

This topic can also be found in this CJLS Halakhic discussion, from the Conservative community. It's an interesting discussion about displaying Sifrei Torah that are Pasul in Museums and the Czech Scrolls are a case-point. But I was saddened to read the footnote below:

I do realize the importance of interfaith dialogue and all that, but after such miraculous story of disguise and survival, I'm uncomfortable to hear that these special scrolls found their way into Cathedrals and churches. For some odd reason, it brings me sad flashbacks of another major tourist attraction of Prague - the Crucifix with the Hebrew inscription of Kadosh, Kadosh. Oy!

You can also read this PDF for more info about the scrolls.