A Brief Dikduk Dvar Torah on Pessach and Shemini

I don't focus much in Dikduk but I had a cool insight on the Parsha of this week and I will share. After all, Dikduk and Safrut do go hand on hand.

The Vilna Gaon often times links the "trop" (cantilation sign) of words to their actual meaning. One famous example, in Shemot 1:13:

Many commentators explain that the Jews stayed in Egypt for less time because of the extreme hardship of their slavery. In the verse above, the Torah describes this hardship and the words have a cantillation sign called "Kadma Ve'azla". Says the Gaon that if you take the name of the cantillation literary it means "Anticipated and went" in Aramaic, indicating that because of the hardship of the slavery the Jews "anticipated and went" from Egypt before pre-set time. I heard this yesterday and I got excited about this kind of Dvar Torah and had the following insight:

In the coming week's Parsha, Shemini, I saw a very rare cantillation sign in the passage that speaks about Nadav and Avihu, the two sons of Aharon who died while doing work in the Mishkan. The Torah explains that they brought an....:

The rare "trop" below the word "Lo" is called Mercha Kefula or, alternatively, "Trei Ta'amei". Following the methodology of the Gaon, if we take the word "Trei Taamei" literary it means "Two Reasons" in Aramaic (I don't know the exact translation of the other name, Mercha Kefula, but Kefula also means two). The Talmud, mentioned by Rashi in this passage, says that there are two reasons why Nadav and Avihu died - either because they entered the Mishkan drunk or because they said an Halacha in front of Moshe, two actions that cause a death penalty. So here again, the trop gave us a hint about this passage.

Update: I refer you to Josh Waxman's piece on the Mercha Kefula, where he discusses this pshat and gives a broader perspective to this distinctive trop.
Posted by YK at 2:34 AM No comments:

This is one of the most hotly debated topics of Safrut and I just want to write a little bit about the basics and how this subject impacts us today. Although this is a longer-than-usual post, I can safely say it's my most important piece so far in this blog, since it has a direct impact in two daily Mitzvot - Mezuza and Tefillin.

The Basics
The Torah is comprised of many parshiot, or "segments", which can be connected to each other in two ways, in a "Setuma" (סתומה) layout or in a "Petuha" (פתוחה) layout. The Rambam and the Rosh discuss what's the exact layout of Setuma and Petuha and in many instances what is a Parsha Stuma for the Rosh is a Petuha for the Rambam.

The two instances where they disagree are the following:

The best way to visualize this discussion is by taking a look at the Mezuzot of the Ashkenazim and the Sephardim. As you will see in the next section of this post, the Talmud says that the Mezuzot must have a Setuma layout and the Sephardic Jews write it like the opinion of the Rambam (see pic below). According to the Rosh, this is actually a Parsha Petuha layout !

Today, all the sofrim don't have to worry about these layout issues since they have the luxury of copying it from spotless computerized Tikkunim, so all Sifrei Torah today have the universal Petuchot and Setumot, which is great. But until recently the sofrim didn't have such great Tikkunim and they occasionally had to use a non-universal layout.

If a Sofer is forced to use a non-universal layout the Rema notes that he should not stray away from the opinion of the Rambam, since he had a very reliable Tikkun in his possession. Most scholars say that this Tikkun is the Aleppo Codex, and I hope I can write a more about this codex in the future.

Impact in the Modern Day Mezuzot

As I introduced in the previous section, the Rambam vs. Rosh discussion has a direct impact in the layout of our מזוזות. The Mezuza has two Parshiot - Shema and Vehaia - and the Talmud says that they must be connected in a Setuma layout. You would think that we again use the "universal" Setuma layout in a Mezuza but that's not the case and that's when this whole subject becomes really interesting. The Sephardim, expectedly, follow the non-universal Setuma of the Rambam and they are "safe", since they have no business with the Rosh's shita. But for the Ashkenazim is really tricky and here is why.

Until some 300 years ago, if one would open an Ashkenazi Mezuza he would see a very odd layout, that would not conform with ANY of the main opinions. Basically, the Parshiot were written without any pause, almost like the two parshiot were in fact one. Although this was a very established Minhag, many Halachic authorities sought to fix the problem and choose an alternative layout. There were two main solutions proposed, one by the Taz (Turei Zahav) and another, more "radical", by the another leading Rabbi (can't remeber the name now..).

The Taz's proposal, which changed the established Minhag just a little and allegedly was good both for the Rosh and Rambam's opinions, was widely accepted by the Ashkenazi Jews and it has emerged to become the standard layout which we use until this very day. You can see the modern day Ashekenazi (left) and Sephardi (right) Mezuzot in the pics below. There's a third solution, proposed by the Mahari Abuhab, which is very interesting and worth to mention. He proposed the most obvious solution: to use the universal Setuma layout, thus solving all the problems. No one really accepted this solution, and the Shach (יו"ד סימן רפח סק"י) speculates that there is Mesorah that disctates all the words which are line-headers. According to the Mahari Abuhav, the line of the second Parsha will not start with "Vehaia", like the Ashkenazi and Sephardi Mezuzot, but with the word "Mitzva" (see pic below). That might explain why people didn't follow this opinion. Rabbi Moshe Feinstein explores this topic in more depth in יו"ד סימן ק"פ. 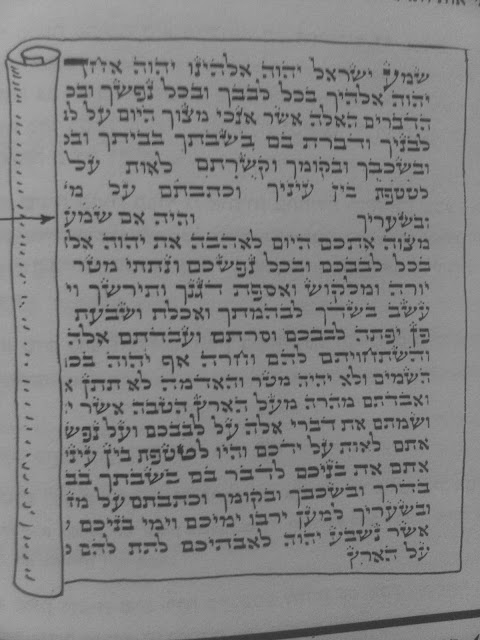 I find it strange that the Ashekenazi Jews don't write the Mezuza in the way the Sephardim do, in accordance to the Rambam's shita. After all, the Rema did say that when in doubt the opinion of the Rambam should be followed, and here in Mezuza I would think the same rule applies. I guess the Ashkenazim were hesitant to completely refuse their old Minhag and preferred the Taz's solution, which is a slight amendment to the Mezuza layout they already had.

While the Petuhot/Setumot topic has great revelance to Mezuza, its relevance to Tefillin is even greater. If a Mezuza wasn't written in a proper Setuma way, the Mezuza is still Kosher "bedieved". In Tefilin, it's more problematic - if a Tefillin doesn't have this Setuma layout, the Tefilin are potentially Pasul!

Like in Mezuza, the Sephardim do the Setuma layout like the Rambam, so once again they're safe. Most of the Ashkenazim follow once again the solution of the Taz, but I've heard of many Hassidim who are Makpid in following the Rambam in the Tefilin layout because of the above-mentioned stringency. From my personal research, even tough these groups have Rambam Tefillins, their Mezuzot are written according to the Taz, a rather ironic fact. In my humble opinion both Mezuzot and Tefillin should be written in the same Setuma way - be it like the Rambam or like the Taz - but that is the least of my "problems":

Now I understand better what they say in the name of the Gaon - that we would have to own over 70 pairs of Tefillin if we wanted to be "yotze" all the opinions.

I didn't even mentioned the "Breuer" factor - the recent debate about the Petuchot and Setumot found in the Aleppo Codex, extensively explored by the late Rabbi Breuer. That's a whole different story, and it's difficult to fully understand it before knowing the basics of Setuma and Petuha Parshiot, which you hopefully do know by now. I will get into this in another opportunity. Gitten Tzimmer!
Posted by YK at 8:08 PM 7 comments: