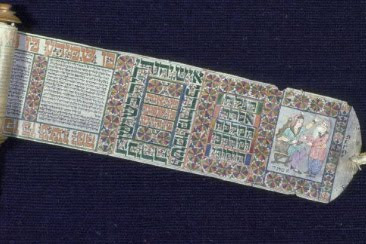 I came across this beautiful Esther Scroll from Iraq. It's a very special piece, with symmetric motifs and splendid coloring. Written in Veilish, the Sephardi version of Ktav Ashurit.
Full disclosure: 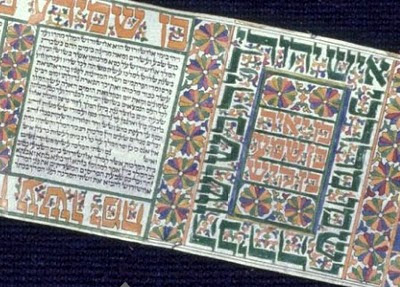 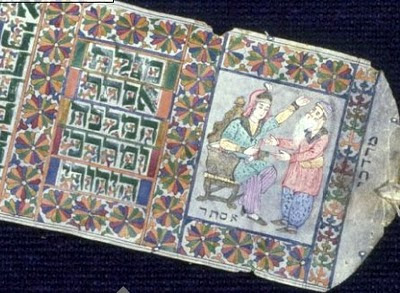 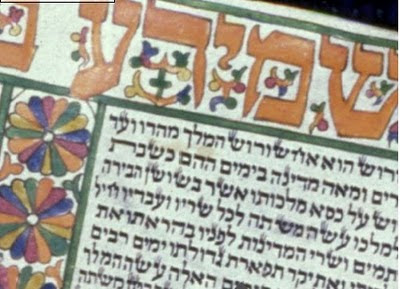 Good Hand or a Good Heart?

"Ze Keili Veanveihu", roughly translated as ”this is my G-d and I will glorify him", is the source of Chazal's concept of beautifying and adorning the Torah and Mitzvot.

This concept is specially relevant when writing a Sefer Torah, Tefillin and Mezuzot - it's good to have a nice hand writing and a nice klaf. But what should you do if you are confronted with the following dilemma:
This is a great "Hakira" (paradox) and there are arguments for both sides.

The Kaf Hachaim, a very proeminent Sephardic codifier, writes in Hilchot Tefillin that you should choose option #1 because "people look at eyes, but G-d looks at the heart", meaning that G-d favors a good heart over aestetics. But why?

The Kaf Hachaim doesn't go this far but I've heard a very good explanation for choosing option #2: the concept of Zeh Keili Veanveihu only applies to something that is displayed in public, to everyone's eyes. The Tefillin's parshiot are sealed and never displayed in public, so there's no reason to favor aesthetics over a good pious sofer. The Kaf Hachaim doesn't necessarily subscribes to this explanation but the bottom line is the same - choose option #2.

In the other hand, the Machane Ephraim says that it's impossible to know who's really pious and who's not - we can only speculate, and appearances can be deceiving. If so, the only fact-based analysis that can be made is the quality of the ktav and that alone should be the deciding factor. This would lead you to favor option #1.

This leads us to the next question - what would be the answer in regards to Sefer Torah, which is always displayed in public? Should you choose a better hand or sofer that is known to be a special person?

The answer is option #1, that is, choose a sofer with the best handwriting. The Poskim also say that if you write a Sefer Torah to yourself and later find that a specific yeriah (section) is not written nicely, you may rewrite a new, more beautiful yeriah. That's because of the concept of Zeh Keili, which is critically important in Hilchot Sefer Torah.

Finally, the last branch of this topic. Joe knows how to write Sta"m but he isn't a pro; his handwriting is just ok. Now Joe wants to write a Sefer Torah, in accordance to the Torah's commandment of "Kitvu Lachem", but he is thinking if it's better to hire a professional sofer who has a better hand. What should he do?

The uber-popular Nitei Gavriel says that you should hire a sofer with a better hand-writing and he brings numerous sources for this, but I have strong objections to this claim. They are summarized in the small-case text below, but this is only for the readers who like in-depth discussions:

(Firstly, the Talmud in Sukka says that a person should only spend a 33% (or 20% according to others) premium for a Hiddur Miztva and not more. For instance, if a regular Etrog/Lulav set costs U$70, you don't have to pay more than U$93 if you want to do Hiddur Miztva. Zeh Keili Venveihu is a Hiddur Miztva and if Joe hires a Sofer who has a better hand this will surely incur a cost of more than 33% of the cost of this Miztva, so having a nicer hand writing in this case is not a compelling argument. I would rather say that Joe should write it himself even if his hand writing is not as nice as the Sofer's since there's no Chiyuv of Zeh Keili Veanveihu here.

Secondly, I have a practical problem with this approach. So let's say we do require Joe to hire a Sofer who has a nice ktav - who should he hire? Let's say he hires David, who has a nice ktav, but if you look around you will always find someone better. Will we also tell Joe to go necessarily to the best Sofer in the world in order to conform with Zeh Keili? I don't think so - there's no end to this. I rather think Zeh Keili only applies to a case where the hand writing is ugly, in which Ze Keili urges you to choose a better hand. But if Joe has a decent Ktav - not ugly, but ok - there's no concept of Zeh Keili forcing him to hire the world's best sofer.)

This discussion has special appeal to me since I plan to write my own Sefer Torah. I don't have the world's best Ktav but I think my hand-writing is quite nice, and although the Nitei Gavriel says I should hire a Sofer I will not heed to his advice so quickly. If I do this, I will do it myself!

(full disclosure: the Nitei Gavriel is not a Posek, just a researcher (melaket) so his words are not final, hence my opposition to his claim)