Founded by Rabbi Yitzchak Shteiner and Rabbi Yitzchak Goldshtein, Machon Ot is a non-profit organization based in Jerusalem which has developed computerized techniques of torah identification.


Every examined scroll is entered into The International Torah Registry, a worldwide computer database assigning a unique torah code (likened to a fingerprint) to every torah scroll analyzed. Using this technique, any torah scroll can be immediately identified and matched with its owner. This technique is the only one used by both The Israel National Police, Interpol and The New York Police Department for returning a recovered stolen torah scroll.


I've seen their sticker in the Aron Kodesh of many Israeli synagogues and they are well known there. This is a great initiative and I hope it catches on in the rest of the world. Their service is very affordable and it can help in case of robbery or loss - something unfortunatedly not uncommon today (see here about a case last year in Europe)


1. When was the Machon founded?
1988. It's a non-profit organization and our mission is to repair and donate Torah to places which do not have a Kosher Torah Scroll.
2. How can a client send a scroll for analysis? Must he send to Israel only or also other locations?
He needs to fill up a registration form and submit it to Israel. We also come to the US from time to time.

3. How many Torah scrolls have the "fingerprint" identification today?
15000.

5. Do you check who wrote the Sefer Torah you analyze? The scrolls with Machon Ot fingerprint are all Kosher?
We can't know who wrote the Torah but we have signs that tell us if it was written by a Kosher Scribe. We check Kosher and damaged Torahs and provide an estimate in case of need of repair.

6. How much it costs to fingerprint a Torah Scroll, roughly?
About U$100.

7. Did the police recover any scrolls because of the fingerprint?
Yes, in Yahud (Israel).

A student from Indiana University emailed me some pictures of an old Sefer Torah which reminded me of a
few obscure Halachot. Take a look in the first two pics: 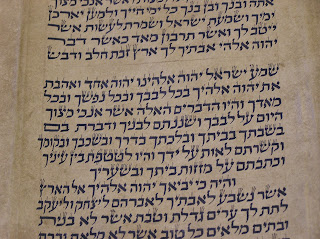 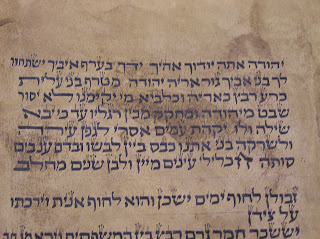 This Torah is written in Veilish - the Sephardic Script - and it has inverted Tzadi (and Shin), which means that it was influenced by the Ktav Ari. The Sofer follows the Rambam's opinion of Parshiot Petuchot and Setumot but he used an odd layout for the Parsha of Shma, not sure why. I will research further.

As you can see, the words of Shema have many extra Taggim which are today only found in our Tefillins (reminds me of the popular practice of writing Sifrei Torah in Ktav Ari, a script was supposed to be used only in Tefillin - click here for my post on this topic).

The student notes that the parchement is made from sheep skin and although that's very unusual, halachically speaking that's 100% kosher since you can write on the Klaf of any kosher animal - be it deer, sheep or even chicken (never seen this one but it's mentioned by all early sources).

But the most interesting bit comes now: 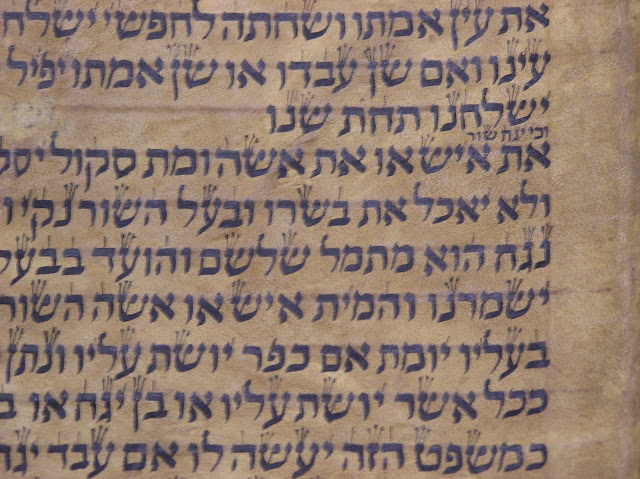 This section is very interesting - note the ultra small writing. Here's what I think happened.
This Parsha is an "open" parsha (Petucha) but the Sofer originally erred and used the Setumah layout (see the evidence at the end of line 3) which looks like this: 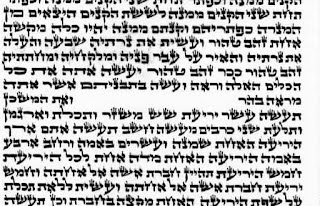 The Sofer only realized the mistake later and it was too late to fix it properly, since the next lines were all in place already. Since this is a mistake that would render a Sefer Torah 100% Pasul, the Sofer came up with an ingenious solution found in Halacha. He erased the words at the end of line 3, effectively erasing the wrong layout and rewrote the words by "hanging" them at the beggining of line 4. This changed the layout to a proper Parsha Petucha (according to the Rambam) and it magically turned the Sefer Torah kosher again.

That is, that you can always "hang" a letter or even a whole Pasuk on the space between the lines. Now we can fully appreciate the smart solution of this Sofer.
Posted by YK at 10:30 PM No comments: