After some 2 months I managed to finish my first Megilla, a small 11-lines Megillat Ester. I put a great deal of effort in this project since I'm not planning to write another Meggilat Esther anytime soon - it's way to much work and this is only a hobby for me. So I wrote it slowly, in the best way I could. No one writes an 11-lines Megilla right off the start since the parchment is more expensive, but I figured that I should do it right if I only do it once.

The original goal was to finish by Purim but I decided to take it easy and not run too much, even though I do feel quite stupid to finish it just 3 weeks after Purim... I was intending to bind whatever I had ready on the day before Purim and bring it to Shul - after all, according to Halacha if the Megilla is 51% complete one could technically recite a blessing over it and read it in public (as long as no full chapter is skipped) and I had a good 75% ready, but I was too busy to bind the klafim together on time.

Be as it may, I'm posting pictures of the whole Megila at the end of this post. I would greatly appreciate if anyone finds mistakes, I only went thru it once and it's easy to overlook your own mistakes.

Also, I added a few little decorations like the ones you see in the popular Hamelech Megilot. As I noted in my post about Megilla lines, the 11-lines Megilla is not "Hamelech" (i.e. it doesn't always start with the word Hamelech at the top of the column) but I did take the liberty to decorate the Hamelechs that appeared in the top of the columns. That's the cool thing about writing your own Megilla - you can do (almost) whatever you want! 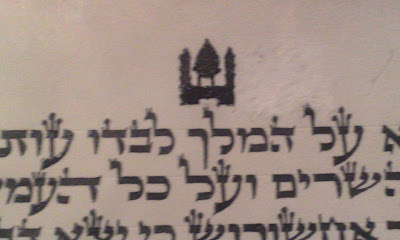 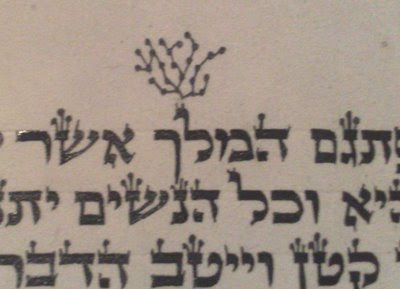 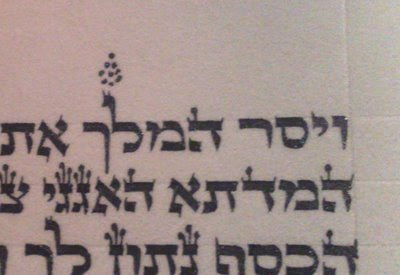 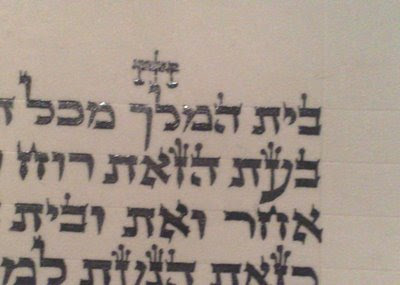 From left to right: The Palace, The Tree, The Tear, The Justice 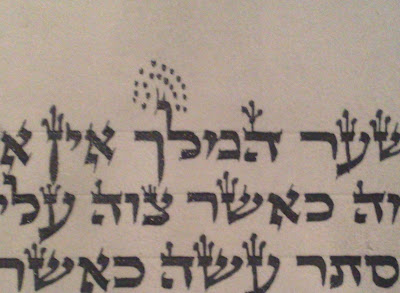 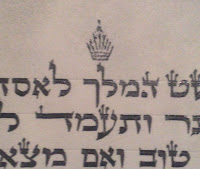 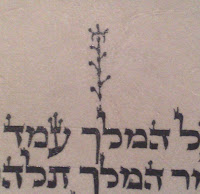 From left to right: The Dots, The Flames, The Crown, The Sharbit

From left to right: The Two Kerubim, Another Crown, The Galaxy

And here it's the full Megilla. I couldn't post it in order, so it's all scrambled together...: 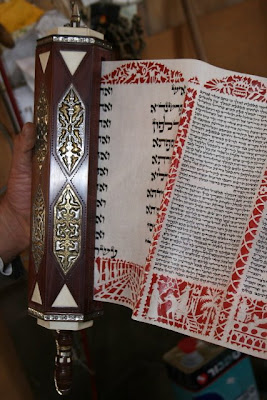 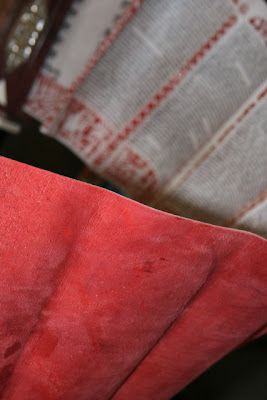 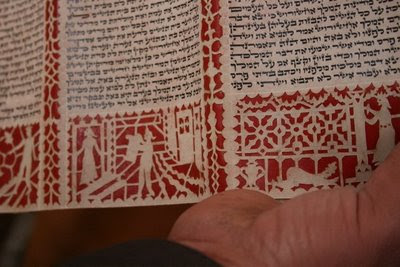 This is a very special and contemporary Megillat Esther made by a personal frien, Uri Revach.

It's hard to do papercut in a Megilla since the Megilla becomes too delicate and thus hard to handle. Aside from this, the papercut work hardly gets its full value since there's nothing behind it - no contrast.

So this artist came up with a solution - he stuck the Megilla in red leather, enhancing the papercut work and also giving to the Megilla a "royalty" feel. He also made the case, which is made out of wood, silver, gold and ivory. All in all, a true masterpiece.

The Parchement - Klaf or Gevil? 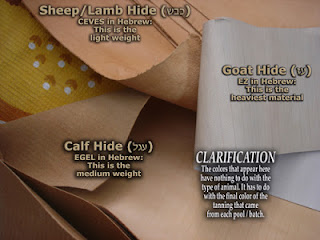 Torah Scrolls were always written in the "Gvil", the outer part of a fully-grown kosher animal's skin - sheep, goat, deer and so on (see image in the right, credit to the Gewil Institute). That's how Moshe Rabbeinu, the Ran and Rambam wrote their own Sifrei Torah and that was the only parchment used by Jewish scribes throughout the centuries.

As I wrote in my post about the Kulmus, around 700 bce the feather quills started to become immensely popular among scribes in general and, specially in Europe, many sofrim started to favor these quills instead of the "original" reed quills. The parchment was also improved and the European scribes started to write not on the outer, but on the inner part of the animal's skin, because it was more smooth and thus suitable for the delicate feather quills (reed quills are more sturdy and can write in either Gvil or Klaf. Feather quills don't write well in Gvil). This inner part of the animal's skin is called "Klaf" (קלף) and eventually all Ashkenazi scribes switched for this parchment and the feather quill altogether, for both Mezuzas and Torah Scrolls. The Gevil went "out of fashion", so to speak.

The Ashkenazi Rabbis accepted these changes and an all Ashkenazi Torah Scrolls are written in Klaf until this very day.

But the Sephardi world was less influenced by these changes and the Sefardi sofrim kept using reed quills and Gvil parchement, like the original Sifrei Torah. However, as the Sephardi Jews started to leave the Arab world it seems that they were influenced by the Ashkenazi way of writing and many Sefardi scribes today do use feather quills and Klaf, a surprising fact. Virtually all parchments produced in Israel are "Klaf", not "Gvil/גביל".

Last week I luckily found a great Yemenite website which is pushing for the "resurrection" of the Gvil parchment (read "The Gewil Torah Scrolls are Popular once Again" - take it with a grain of salt...). The Yemenite Jews follow the Rambam's customs blindly and as I noted, the Rambam wrote his own Sefer Torah in Gevil, so this campaign really makes sense. But they claim that a Rabbi Mordechai Eliahu, the former Sephardic Chief Rabbi, has a Gvil Sefer Torah, so I guess many Sephardim will like this campaign as well since their older Sifrei Torah are also written in Gvil.

It's easy to differentiate between a Gvil Torah Scroll and a Klaf one. The Gvil scroll is dark in the inside (where the text is written) and lighter in the reverse side; the Klaf scroll is the exact opposite.

I was so fascinated by this story that I decided to make a field trip to a klafim factory in Jerusalem. I saw the whole process and the owner explained to me that besides all the Gewil vs. Klaf story there was another interesting development.

Until very recently, all klafim were made out of skin of fully-grown animals. But the Rabbinic authorities always praised the skin of a "Shlil" (שליל), or unborn animal, even tough it was unpractical to write a Sefer Torah from a Shlil - you need dozens of fetuses and that was hard if not impossible to find. But 30 years ago someone in the klafim business heard that the big slaughter houses in the US and Europe had dozens of "shlil" everyday in their factories and they didn't have any use from them. Since then all the klafim factories buy these shlils and make a super-smooth klaf out of it. So our klafim became even better!

The klafim process, as I saw it:
1- Put the skins in chemicals for 4 weeks.
2- Take it out and remove the hairs.
3- Hang it for a few days so it can dry.
4- Stretch it for a few days.
5- Remove the remaining impurities.
6- Cut the Klaf to the desired thickness and size. 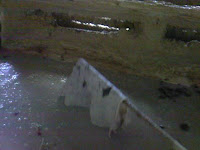 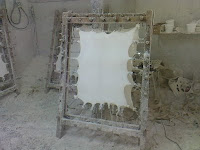 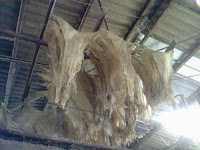 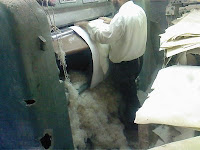 Rashi Vs. Rabbeinu Tam - Round 1

One of the classic discussions among the commentators of the Talmud is between Rashi (11th century) and his nephews, known as the Tosafists. There are many famous discussion between them but in this blog we focus in Safrut and there are two classical discussions pertaining to this subject. We will deal with one of them in this post.

while Tosafot says that there's a "pyramid" (a.k.a. "the hunch of a camel") in the very middle of the letter like this

, essentially two connected Zains (you can see the original page of the Talmud, where this discussion is to be found, here)

That means that the grandsons (Tosafists) had a different Torah Scroll than their grandfather (Rashi), a striking fact. And the Halachic implication of these two versions is not simple - a Sefer Torah that has some Chets like Rashi and some like Tosafot might be pasul, so the rabbis decided to adopt a "blend" of the two versions, which we still use to this very day: 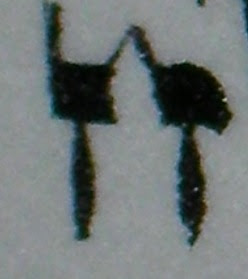 (my own hand-writing). The Sephardim have a slightly different version ->

But this is not the end of the story. A few hundred years later the Ariza"l (16th century), the most revered Kabbalist, introduced a few changes in the letters of the Torah and one of the affected letters is the Chet. Instead of two connected Zains, the Ari wrote the Chet with a Vav and a Zain, like this

Clearly, the Chet is the most controversial letter of the Hebrew alphabet and now you know why!
Posted by YK at 10:48 AM 5 comments:

Now that we've all celebrated Purim, I want to share with you the story of another Purim, known to few, which is celebrated by the descendants of the Jewish Comunity of Saragossa (also spelled Zaragoza, Siracuse or Syracuse). Since this story is about a Sefer Torah, it's connected and relevant to this blog.

Before the story, a brief Halachic briefing. Everyone must give the proper "kavod" to a Sefer Torah or any other holy scroll and many customs we have today are a reflection of this Halacha. That's why we keep the Torah in a special cabinet, the Aron Hakodesh, and also why we all stand when the Chazzan carries the Torah to the Bimah for the Parshat Hashavua reading. Most rabbis say that one shouldn't take out a Sefer Torah from the Aron just to show it to visitors, another related Halacha.

Specifically pertaining to the holiness of a Mezuza, I've seen a discussion about a case where the gentile king or ruler requested a Mezuza for his house or palace. Some rabbis were very much against it since we fear for the Mezuza's "kavod", while others like the Rema permit it on the grounds that sometimes we make exceptions for the fear that turning down a royal request will create unnecesary tensions ("Eiva" in Hebrew). That's exactly what happened in Zaragoza, in the 15th century.

I quote a better story-teller:

"Scholars still debate the location of the story. Many favor Siracusa (Syracuse, on the island of Sicily) as the location of our story some 600 (1421) years ago. Others refer to Saragossa, Spain as the location. In any event, The Jewish main street of the city contained 12 synagogues. At the annual royal visit three Torahs dressed in gold and silver were taken from each synagouge to welcome and parade the King through the town. One day the leaders of the community decided that the practice violates the sanctity of the Torah and that henceforth the Torah containers would be marched dressed as before but empty without the Torahs. The practice went well for 22 years.

You can read a longer version of this story on the Chabad site.
And the best part, we have some great pics from this rare Megilla! (credit goes to the Foundation for the Advancement of Sephardic Studies and Culture. Be sure to check the stories of other less known Purims here and here) 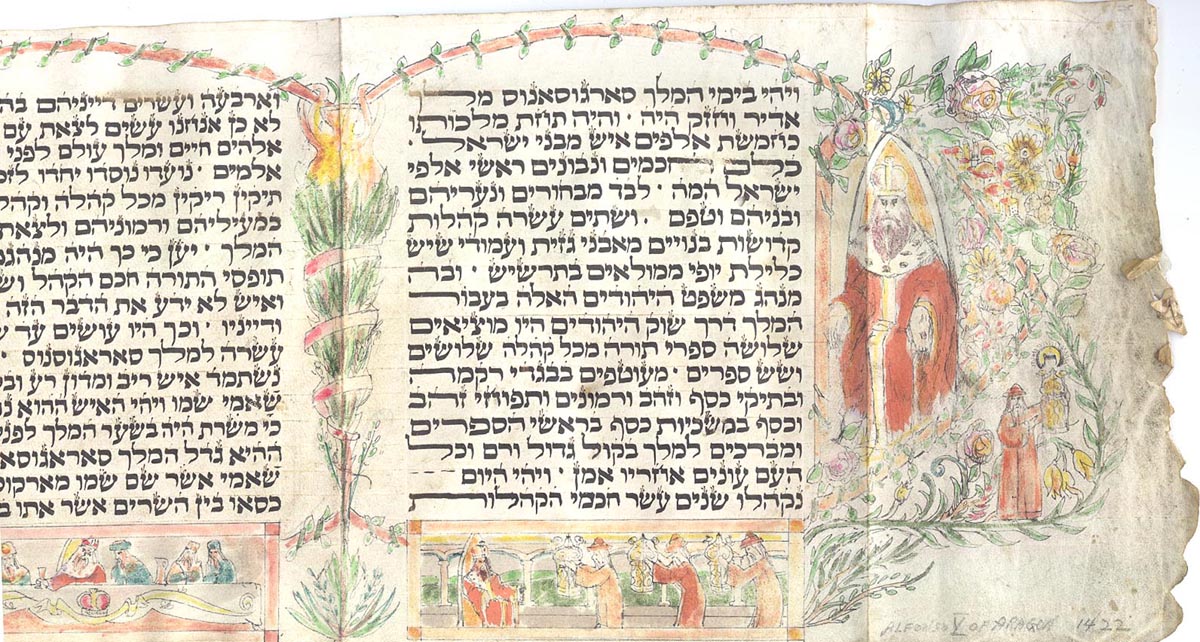 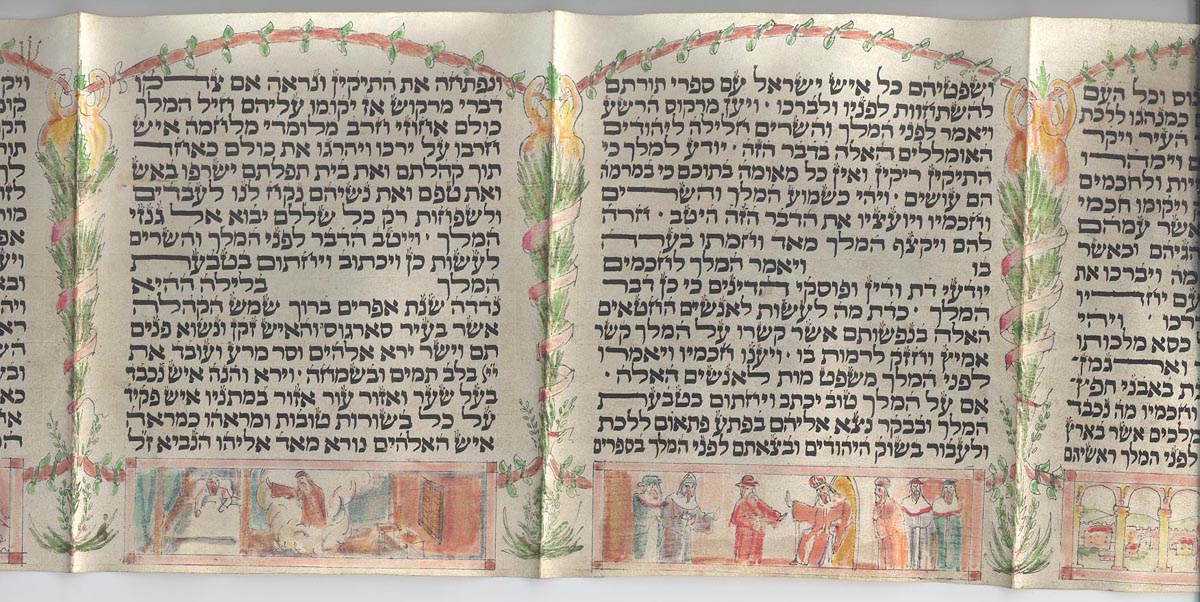 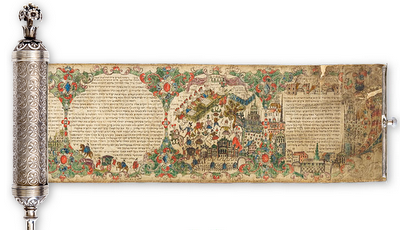 This Megilla is like no other. It's an antique piece from the 18th century Germany and it remains in good condition. The coolness of this Megilla: the illustrations are very complex and detailed, also in various layouts, so the writing is not "uniform" and standardized like normal Megillot - it differs from page to page. Sometimes it has a round shape, or a long shape, as dictated by the illustrations around it.

This Megilla belongs to the private collection of the Gross Family, Tel Aviv. You can get a limited-edition facsimile edition for "just" U$ 4,000. You can read more here.
Posted by YK at 4:33 PM No comments: