Last year I wrote about Shirat Haazinu's differing Mesorah in regards to the quantity of lines this song should have (link here). Since then, I came across a related question - should the Sofrim stretch the lines so they all look exactly symmetrical? Look below and you will understand the two options: 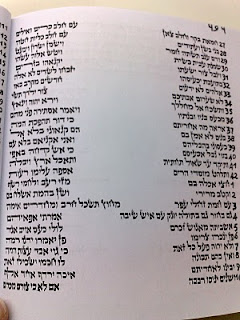 In my earlier post I wrote that the Ashkenazi Sofrim stretched the lines possibly because of Zeh Keili VeanVeihu, that is, because it looks nicer.

I did some further research into this and in turns out that this is already suggested by the Ran (Rabbeinu Nissim, 990–1062), who seem to say that the two columns of Haazinu and also Bnei Haman in Megilat Esther should be perfectly symmetrical (click here for full commentary):

The Noda BiYuda [18th century] quotes the Ran and is even more insistent about this, suggesting a change in the lines' structure in order to make the columns more symmetrical (here's in full):

The Maharam DiLuzanu however disagrees and claims that the Ran was not implying that all sides should be symmetrical - the Ran was solely referring to the column of Bnei Haman to the left, which is always perfectly symmetrical:

The Minchat Yitzhak [1902-1989] has a Teshuva about this and brings more sources, finally concluding that for Hiddur Mitzva, the columns in both Haazinu and Bnei Haman should be symmetrical, but he strongly disagrees with other commentators who raised the possibility of this being Leicuva, mandatory. It's a pity I only came across this now, as I already wrote my Megillat Esther not symmetrically(see here)..

But this conclusion is only valid for Ashkenazi Jews, as the Ran wasn't categorical about this and both the Noda BiYuda and Minchat Yitzhak are Ashkenazi. The Yemenite Jews evidently disagree with this idea, as their Torah have completely asymmetric Hazinu columns. And as noted in my other post, they are supported by the Aleppo Codex, which means that their version is most certainly the correct one. So my Megillat Esther could have been written symmetrically, but perhaps through my mistake, I actually wrote the very best pattern after all?
Posted by YK at 4:19 PM No comments:

A few months ago I saw M. Pinchas' post about Havchanat Tinok in regards to Shem Hashem. He was confronted with the following problematic Yud from "Elokim" :

The Yud is too long and it resembles a Vav, causing a paradox: if it's a Vav, this is a clean-cut Psul in the Sefer Torah and it must be fixed. However, if it's a Yud, it's forbidden to touch it since the word is already Holy (Elokim is one of Gd's names) and warrants no fix. In other words, both options are quite dramatic - a potential psul vs. the issur of fixing a proper Shem Hashem.

M. Pinchas, based in the Or Hamelech, invoked the Havchanat Tinok solution to figure out which way to go. It has been some 4 months since I read this but it stayed in my mind since then, as this is a quite puzzling and delicate situation.

Last week I saw in the Ot Yatziv from Zanz (a great new sefer on Stam) a discussion about this and he concludes that in the case of Shem Hashem we should consider this letter to be a Yud, even though it's too long, because according to many opinions even a long Yud is still a Yud if it has a "Kefifa", curve, and I think the Yud of Elokim seen above has a slight kefifa.

According to this view, the Elokim should be considered kasher and therefore holy, and shouldn't be fixed. See the text below: 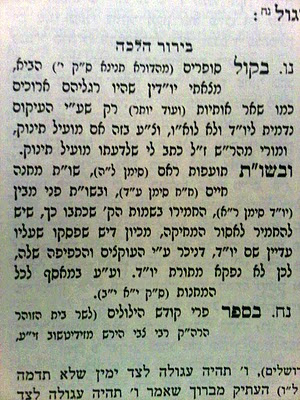 The author goes on to explain that many Sofrim write a long Yud purportedly, because of Kabalistic motives, and that there's no reason to render them Pasul.
Posted by YK at 12:33 AM 4 comments: