Using the Magnifying Lense in Safrut 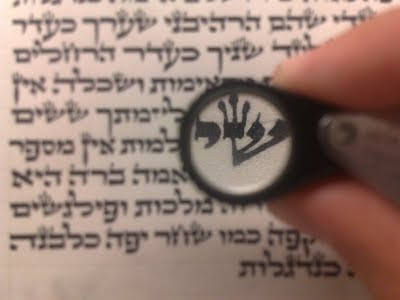 One of the most important concepts of Safrut is that every word should be "Mukaf Gevil" - which means that it should be surrounded by white. For instance, when two letters touch each other there's a no Mukaf Gevil - the letters don't have their own place in the Klaf. That renders a scroll Pasul.
Often times it's difficult to know if the letters are touching only with the naked eye. "Take the magnifying lense" you think. Well, it's not that simple. Let's go step by step.
Let's say there's a letter Taf which seems to be 100% ok. But when looking with a magnifying lense you see that there's a tiny white lines separating the letter in two (Hefsek Dak). This is a case of using the magnifying class Lechumra, for a stringency, and the Mishna Berura undoubtedly says (see Biur Halacha "ot achat" here) that Sefer Torah will not be rendered Pasul because of the magnifying lense.
But what about a case of using the magnifying lense Lekula, for a leniency? For instance, a case when looking with the naked eye there's a Negia - the letters seem to be touching, but when using the magnifying lense you can see a tiny space between the letters. That assessment would bring a leniency - the Sefer Torah would be rendered kosher if you accept the use of the magnifying lense!
In this case there seems to be substantial backing for the use of the magnifying lense (Rabbi Tzvi Pesach Frank and Shut Sheerit Yisrael) Lekula and that this seems to be the "widespread Minhag amongst the Sofrim of Jerusalem". This seems to be the accepted custom to this day.
However some disagree and hold that the magnifying lense shouldn't be taken to account at all, be it for a Kula, be it for a Chumra. The Shut Tuv Taam Vadaat says that if we were to employ the magnifying glass, we wouldn't be able to drink from most waters as they have tiny insects that cannot be seen by the naked eye.
Yes, we all remember the huge controversy surrounding the New York water filters Psak.
Be it as it may, if you hold that water bugs are ok because they can't be seen with the naked eye, the same should be said in Safrut - a Negia that can't be seen with the naked eye will not be considered a Negia.
In my opinion the logic of the Shut Tuv Taam is flawless - either you take the magnifying lense to account either you don't. To use it only Lekula sounds a little odd. But in practice, all Sofrim use the magnifying lense when inspecting Torah, Mezuzot and Tefillin.
UPDATE: I did some further research into this and it turns out that Rabbi Vozner - one of the leading poskim today - says that Sofrim can and should use a 6x magnification lense. He says that a 6x magnification is what a person would normally see when paying very much attention to something. In other words, 6x magnification doesn't reveal anything "new"; it only aids the sofer to see something that he could see if he would be very attentive. And Rabbi Vozner says you can use 6x lense for both Kula and Chumra. That conforms with the position of the Shut Tuv Taam, which made most sense anyways.
Posted by YK at 9:33 PM 1 comment:

I just finished my second Mezuza and I welcome any feedback. It still needs to be checked, so you might find a mistake (I hope not).
My only real troublr was with the word Veshinantam in the second line but I managed to fit in. Otherwise, it was a smooth ride with no mistakes.
Posted by YK at 3:04 PM 1 comment: