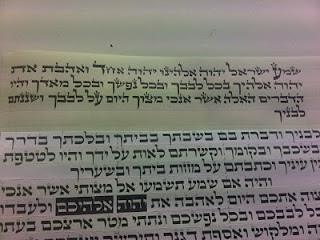 Here's snap of my new project, my second Mezuza. I did have some problem to fit in the word Veshinantam but I managed..!
Posted by YK at 11:25 PM No comments:

Mark of Cain and the Mezuza of Egypt

In last week's Parsha the Torah talks about the "אות" Cain received after he complained that his sin (killing his brother Hevel) was too much too bare and that he was afraid of being victim of revenge:


The Midrashim speak about this Ot / אות and there a few possibilities mentioned:
The Zohar also mentions this last Pshat and the Peirush Hasulam, written by Rabbi Yehuda Ashleg in 1945, says that the letter is the Vav, albeit without quoting a source.

So it seems to me that there's room for interpretation here and I have an alternative option, based on the Torah Shelema's take on an old Minhag on Hilchot Mezuza. Please bare with me as I lay the background story before I move forward.

In the times of the Geonim there was a Minhag of writing additional mystical names in the Mezuza alongside the Mezuza's Parshiot. The ספר יראים brings it down here and you can see this odd Mezuza below: 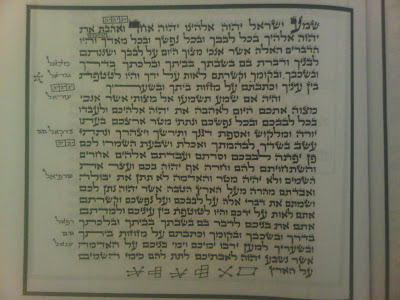 The Rambam and others strongly opposed this practice and this Minhag eventually fell in disuse. But if you look carefully, you will see five letters written in an odd font at the very end of the Mezuza. Rabbi Kasher brings the first explanation, which is that these are angel names written in special Kabbalistic code, but he goes to explore a whole different possibility - that these might be Ktav Ivri letters, which is the old Hebrew script used by Jews before the times of Ezra the prophet. In regards to this second explanation, the question is obvious - why in world would five Ktav Ivri find their way in a Mezuza?

The answer is unique and extremely interesting. In the last Makah of Egypt, the angels came down to kill the Egyptian firstborns and Hashem told Am Israel to mark their door so the angels would not enter their houselhold (exodus 12:13):

The simple reading is that the blood will be a sign, but here again some commentators say that the sign was actually a letter, written with blood in the doorposts. More precisely, an X which is the Ktav Ivri letter for Tav, which symbolizes life (תחיה) [The Jews at that time only used Ktav Ivri and that's why they marked it like an X and not in the shape of our current Tav (ת)].

Rabbi Kasher says that because the X protected the Jews in Egypt, it's reasonable to assume that many started to add this X to their actual Mezuzot for an "enhanced protection" - after all, the Mitzva of Mezuza is a remembrance to the Mezuza of Mitzraim, which was simply an X.

That explains the first of the five letters, the X.
The five Ktav Ivri letters in the Mezuza are equivalent to תחאחא in our script and they mean תחיה אמן חיים אמן - a prayer for life. But the point is, that Rabbi Kasher identifies the X in the Mezuza as the very X marked in the doorposts in Egypt, which in turn was called an "אות / Ot".

If so, perhaps the unidentified "אות / Ot" given to Cain is here again the same unidentified "Ot" that is mentioned by Yetziat Mitzraim - the X, or Tav. But why would Hashem give out of all letters the Tav?

The explanation is the same as in Yetziat Mitzraim: Tav is the initial of תחיה, "you shall live", and it was Hashem's guarantee to Cain that he would not be murdered - that is, that he would live.

Below you can see the source, which is the Torah Shelema (by the way, a hard to find but invaluable resource to anyone seeking clarity in the topic of Ktav Ivri and Ktav Ashurit). 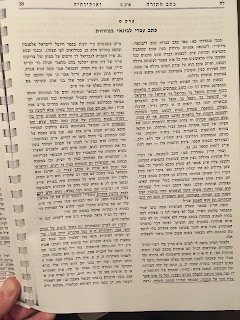 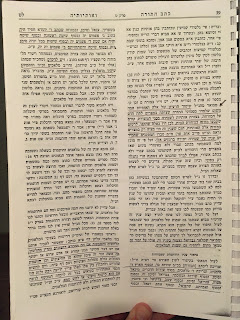