In this series of posts, you will read about the few stories of Chazal that speak about Sta"m - Sefer Torah, Tefillin and Mezuzot. This story is about a Mezuza and a diamond gift (full disclosure: YK works with diamonds).

"Artevan (either a king or a wealthy Jew), sent to Rabbenu Hakadosh (Rabbi Judah the prince - 2nd century CE), the compiler of the Mishnah, a precious diamond as a gift, and requested that Rabbenu Hakadosh reciprocate by sending him a gift, equal to his. The Rabbi sent him a mezuzoh. Artevan asked him, "I sent you and invaluable diamond, and you send me a gift that is worth a half-shekel? Rabbenu Hakadosh replied, "My property (Rabbenu Hakadosh was very wealthy) and your property cannot pay the value of a mezuzoh, as King Solomon says in Proverbs: 'All your desirables cannot equal it.' Moreover, our riches we must guard, whereas the mezuzoh guards us."

The Sheiltot of Rabbi Achai, Parshat Ekev, adds another layer to the story:

"Right after (Rebi sent the Mezuza), Artevan's only daughter fell seriously sick. He summoned the most skillful physicians, but no one could save her. Artevon then decided to heed to Rebi's advice and fix the Mezuza in his doorpost and his daughter got immediately cured."

"There was a story with Artevin, who was once checking the market's Mezuzot and got fined by the local authorities (who banned all Mezuzas)."

Why was Artevin checking Mezuzas in the market? Some commentators say that after his daughter healed he took upon himself to make sure that every Jew would have a proper Mezuza at his doorpost, and he would go around checking them once a year.
Posted by YK at 11:56 PM No comments:

The Two Columns of Shirat Haazinu

The Mitzva of writing a Sefer Torah comes from this past week's Parsha, Haazinu. In the preceding Parsha, G-d says to Moshe that the Jews should "write this song", in a reference to Haazinu, one of the Torah's two songs (the other one is Az Yashir). Although the commandment refers only to Haazinu the commentators note that it's prohibited to divide the Torah and write it in a form of "megillot, megillot" i.e. in fragments, since all the Torah is one. So the commentators all conclude that the commandment must have been to write the whole Torah, which will contain the song of Haazinu.

This highlights how important this intricate song is in relation to the whole Torah.

Also aesthetically, Haazinu stands out with its special two-column layout. In the modern Torahs, the two columns are perfectly even, like two towers, and usually are two pages long. I wanted to post a picture of the whole thing but I only found this one:

We find the same layout in the Megillat Esther, in which the ten sons of Haman are listed in the same fashion. Like in Haazinu, most sofrim (not me!) stretch the letters so every column will start and end in the same place: But if you look in the old Torahs and in the Torahs of the Yemenite Jews you will see that the columns there aren't uniform at all. Below is a picture from a Yemenite tikkun: 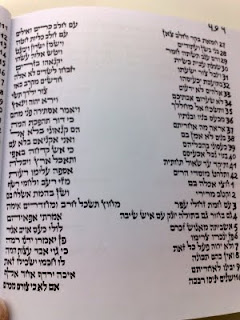 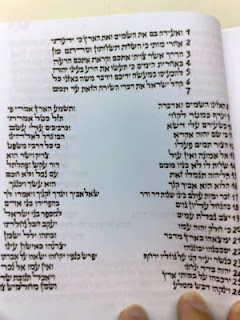 I guess the Ashkenazi sofrim took the liberty to strectch the lines in order to make the scrolls look nicer, on the grounds of "zeh keli veanveiu".

But there's another thing that really puzzled me. Aside from the layout, the Yemenite scrolls also differ in the actual poem structure and that's the real reason why their columns aren't simetrical - there are less lines and thus some of the lines are longer.

For instance, look in the 17th line in the above picture, "zechor yemot olam.." - this is a long line. In the Ashkenzai scrolls this long line is divided in two, enabling our sofrim to justify the lines. Now that's odd! There are two other places where there's a difference in the poem structure but I will leave it for you to figure it out.

Which is the right structure? This would imply that the Ahskenazi structure of Shirat Hazinu is problematic. Halacha says that if there's a pause (parsha setuma or petucha) in a wrong place, this will invalidate a Sefer Torah. If the Ashkenazi scrolls have a different poem structure, some of the open spaces are in the wrong place!

The answer is simple: the open spaces in Shirat Haazinu (and Az Yashir) are not open and separate Parshas, but a special layout of a song. The halachot of Parsha Petucha and Setuma don't apply here and whatever layout you have - Yemenite or Ashkenazi - will be Kosher for all intents and purposes. So although it's clear that the Yemenite arrangement is more reliable, you should not start complaining about our modern-day structure.

This is the story of the layout of Shirat Haazinu. I hope you enjoyed and I wish you a Gmar Hatima Tova!
Posted by YK at 11:49 AM 4 comments:

This is a strikingly beautiful contemporary Megillah. I wish I had more info about this piece but the website, ketubahandart.com, has almost no information about the artist behind it. But I love the "dark" look, gold painting and the papercut. I wish I could find an image of it in better quality...
Posted by YK at 1:47 AM 3 comments: