The Esnoga is one of the most important historic synagogues of the world and it was built during the golden years of the Jewish community of Amsterdam. My family was there for a visit and they brought me some pictures of the scrolls featured in the adjacent Jewish Museum. The Museum's site doesn't have any pictures so I took the liberty of sharing it with my readers in this blog entry.

All of them are unique and showcase the elegance and taste of the Dutch Jews of that era.

The Megillat Esther below has some very beautiful illustrations in between each column and is written is a very odd layout - 30 lines (see my post on this subject here) and each line is way too long (each line should ideally have 30 letters, which is three times the word "lemishpechotam", but in this scroll there are more than 60 letters per line). The letter Peh has a very different shape, with a big Tag in the left top corner. 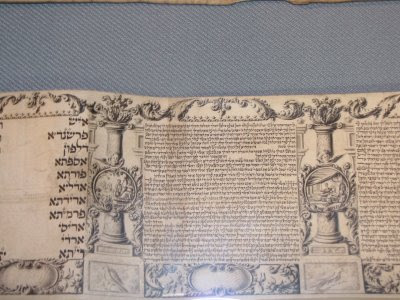 This other Megilla has 32 lines, also not standard, but the lines have the proper amount of letters. What catches my attention is the arrangements of the Parshiot - if you look carefully you will see that the Parsha of "איש יהודי" is written in the middle of the line and "אחר הדברים האלה" has a very odd layout - it starts almost where the preceding line ended. According to our Mesorah, all the Parshiot of Megillat Esther should have a Setuma layout (see my post on this subject here) and if so, this Sofer followed the Rambam's opinion of Setuma and Petucha. 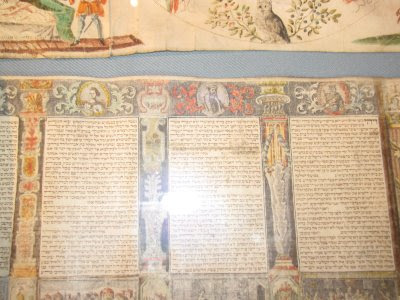 Next is my personal favorite, a Sefirat Haomer scroll. This is the first time I see such scroll and it takes a little time before you actually understand what's going on. The top box is the days' count - 46 days; the middle and bottom boxes are the week's count. 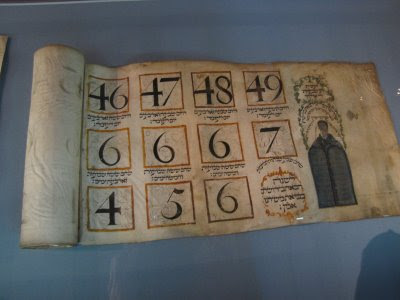 Last but not least, this antique Torah scroll written in Veilish script (read more here). The top Lamed in this Sefer torah is almost bent backwords, opposite to the Lamed of our modern scrolls, which are slightly bent forward. 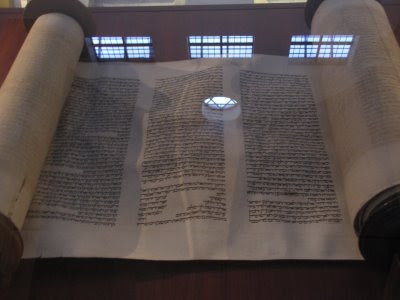 In the Torah scrolls of today, there are very few scribal oddities and it's not so hard to single them out:

owever, many old Sifrei Torah have many more oddities that are no longer in use today (see images). One of the most famous examples is the Peh Melufaf, which is still in use in the Teimani scrolls, and the Torah Shlema has an extensive list of these less popular odd letters. Also, there are numerous additional tagim that are often times mentioned by popular commentators like the Baal Haturim that also fell is disuse.

The Meiri compiled a very detailed work (Kriat Sefer) on the odd letters, depicting the oddities of the Torahs of his time. A more contemporary Sefer was written by the Badei Aharon roughly 150 years ago. There of course the ancient Sefer HaTagin (see image) , which according to tradition was copied by Eli HaCohen from the 12 stones of Yehoshua Bin Nun over two thousand years ago.

What are these letters? Various Geonim, Rishonim and Achronim have mentioned these letters and among them, the Rambam simply says that this is a very old tradition that should be observed. Few elaborate on the reason behind these oddities but the fact is that there was such a tradition and at some point this tradition was lost.

But before the Second World War there was this "in-between" period where some communities accepted this tradition while others were very critical of it, arguing that this tradition was rather unreliable.

This controversy gathered more attention when an old Torah scroll written by Beit Yehuda, a famous rabbi, was found to have numerous otiot meshunot. Also the first Rebbe of Zanz reportedly wrote his Sefer Torah with unusual Otiot Meshunot, and in both cases even those who didn't approve this Minhag were afraid to say bad about these Torahs, given their exceptional importance.

Following the devastating events of the Holocaust, few antique Torah Scrolls remained intact and the Mesora of the odd letters was wiped out alongside with the European shtetls.

This topic is of special interest to me since I'm planning to start writing my own Sefer Torah soon. All these scribal oddities are so interesting and did feature in the Sifrei Torah of previous generations so I got to admit that I felt tempted to add some of these oddities in my writings.

That's why I decided to study Rabbi Ratzabi's authoritative sefer on this subject, featured in the Torah Shelema, and now that I finished learning it I have another approach to this subject. Rabbi Ratzabi doesn't says if scribes should or shouldn't write the Otiot Meshunot but he somehow expounds how confusing and complex this topic is and it becomes clear that whoever decides to write the Otiot Meshunot will be putting himself in a sea 0f possibilities where there isn't a clear path to follow. That is the danger of following a Mesora that isn't yours; it's almost like inventing a Gezeira Shava out of your own mind, which is forbidden.

The very few oddities that have been preserved in our scrolls have resisted the test of time and are our only undisputed Mesora. Here and there I hear of people talking about bringing back the Mesora of Otiot Meshunot but this page was turned after the Holocaust, as I noted above. Whatever is left of it is a living testament of the richness of the field of Safrut and how it evolved over centuries of Exile and persecutions.
Posted by YK at 6:25 PM 4 comments: