My Progress #5: My First Mezuza 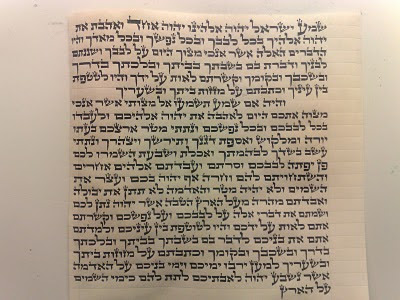 Today I finished writing my very first Mezuza, which means that I'm a step closer towards my goal of writing a Sefer Torah. This time the stakes were much higher - unlike in Megilat Esther and Shir Hashirim I had to write the Shem Hashem and I had to write everything "Kesidran", chronologically. And of course, going to the Mikva became part of my daily schedule, as I can only write the Shem after a proper immersion.

I will give this Mezuza to be checked by a very skilled Sofer here in my town and considering that he is a master in finding unexpected problems, I must say I'm afraid of what he will say. But as far as I can see all is ok. Actually, there's one "mistake" which I deliberately didn't correct because of a problem with the Klaf. Like in my Megillat Shir Hashirim, I made a small hole in klaf while trying to fix a letter, and for that reason I didn't manage to correct this mistake. Can you find it?

Like all my other Safrut items, this Mezuza was written in Ktav Beit Yosef. And like all Ashkenazi Jews, I followed the Tur's opinion of how the Parsha Setuma should be. Read more about this topic here.
Posted by YK at 9:27 PM 8 comments: