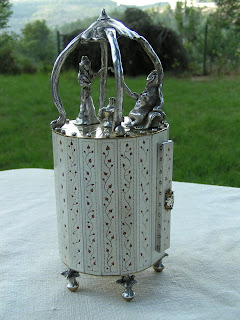 Made out of ivory, gold and silver, this is one of the nicest cases I've seen - I love the look of Esther and Achashverosh and the assimetrical canopy. Maybe one day I will buy it for my 11-lines Megillat Esther... I wish! Artwork by my friend Uri Revach; price upon request.
Posted by YK at 2:02 PM No comments:

The Minhag of Writing the Last Words of a Sefer Torah

One of my favorite blogs, Lion on Zion, wrote a post about women in Safrut and in the discussion thread we somehow got drawn to the interesting "Minhag Israel" of letting other people write the very last words of the Torah in public. But what is the nature of this custom? I got curious and in this post I will write what I read about this.

Firstly, there's a Miztva of writing your own Sefer Torah and a Sofer can write on behalf of others who can't write themselves. But even if you hire a Sofer you must participate in the process in some way - the Talmud mentions that you should buy the klafim, for instance, and usually the "Baal Hasefer" writes a word or more in the Torah. But which word?

Three possibilities are mentioned: "Bereishit", the very first word, or "Israel", the very last or the whole passage of Devarim 33;4 - "Torah Tziva Lanu Moshe (...)". In a best case scenario the owner would write all three but almost no one knows how to write properly and to even write one of the three possibilities is already unrealistic, so the Sofrim found ways to go around this problem.

The "Keter Shem Tov" says that the Sofrim in his time would draw small dots outlining the words Bereishit and Israel, and the Baal Sefer would literary connect the dots. That's one solution.

Today, the Sofrim outline the letters and the owner just fills in. Halachically speaking, an outlined letter is Kosher thus the owner is not actually doing anything - the Sefer Torah is actually finished before he fills in.

But we haven't answered the original question: why is there the Minhag of letting others write a letter in the end of the Torah?

The "Mei Yehuda" (here) offers a nice theory. Halacha says that if a person buys an unfit (Pasul) Sefer Torah and corrects it, he fulfills the Mitzva of writing a Torah. But there's an obscure opinion that says that even if the Torah belongs to someone else, the one who corrects it fulfills the Mitzva the same way. If so, it could be that people that write a letter in the end of the Sefer Torah do fulfill the Miztva according to this minority opinion and maybe that's how this Minhag started.


Be it as it may, this is an ancient Minhag Israel and in many cases is the only indication that the Sefer Torah was written by a proper Sofer - a Torah could look 100% kosher but be written by a gentile, for instance. This Minhag helps us with this issue and here is why:


Before the Sofrim came up with the outlining idea, the owners and guests would write the last letters themselves and, expectedly, the result was somewhat messy - you could tell that the letters were not uniform. But this mess was a good thing; if a Sefer Torah had perfect letters in the end, it would indicate that it wasn't unveiled in public, which is not a good sign. Only when it had the messy letters we would know that there was a public festivity and other people wrote the messy letters, which tells us that the Sefer Torah was most likely Kosher.


This is a great example of Chazal's saying: "Minhag Israel Torah".
Posted by YK at 4:03 AM No comments:

Jewish Fonts - A Guide for the Different Ktavim

Although all Holy scrolls are written in Ktav Ashurit, there are many subdivisions within this script. Additionally, there are other fonts that are not related to Ktav Ahurit, so I think it's worthwhile to talk a little about the Jewish Fonts. 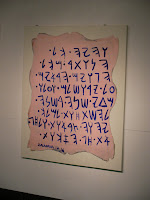 So right from the start, we have two fonts: Ashurit and Ivri. The Ktav Ivri is also known as "Paleo-Hebrew Alphabet" and you can see a full verse from Tanach in the pic in the right. It's way easier to write Ktav Ivri than Ashurit - it's basically sketches rather than an artistic alphabet and I imagine it would be a lot easier to write a Sefer Torah in Ktav Ivri.

Another font that became very popular is Rashi's Script, which is commonly found in Chumashim, Talmud and commentators. This font was introduced in the 15th century and it is still printed today in a standard way, that is, with no variations. If you take to account the quantities of Talmuds, Mishnayot, Peirushim out there that use this script, it's no exaggeration to claim that this script has become more popular than the Ktav Ashurit, only found in

But I'll spend more time talking about the different versions of the Ktav Ashurit, since this is the script we use for all scrolls and most people have no clue about this. There are four versions:
All scripts have the same Halacha status and are Kosher for any Jew, since the differences are very slight. Rabbi Ovadia Yosef, the foremost authority of the Sefardic Jews today, proves this extensively in his sefer Yebia Omer and before him the Kaf Hachaim claims the same, so there's nothing to fear - whatever script you have is okay.

However, if you can choose between these four versions of Ktav Ashurit, why not make the right choice? Most people who buy Tefillin or Mezuzot don't really pay any attention about the version used by the scribe but just like anything else in life you should make an informed decision. And I will try to organize it for you here.

If you are Sefardi, it's easy - buy a Tefillin/Mezuza/Torah written in Veillish. The easiest way to identify this ktav is through the Shin, which has a distinctive round base like this

For the Ashkenazim it's more tricky. If you are not Hassidic go Beit Yosef, which is the standard and most popular version. But for the Hassidic readers I need to first give the big picture.

The Arizal script was introduced by the Ari, in the 1500's. Before him, the Ashkenazim basically wrote in a uniform way, but the Ari, with his unmatched Kabalistic knowledge, pushed for a few changes in the Ktav Ashurit. He also introduced a new way of writing the Holy Shem, according to the Kaballa and many sofrim today write it this way (click here for my post about the Holy Shem). But what most people overlook is the fact that the Ari only pushed for changes in the Tefillin, not in the Torah scrolls. The Ari never intended to change the way our Torah scrolls are written and that's when the confusion starts.

Most Hassidic scribes today write not only Tefillins, but also Torah scrolls and Mezuzas in Ktav Arizal. Frankly, I don't know why, but that's a fact. One of the few Hassidic sects who oppose this practice is the Tzanz dynasty, since the Divrei Chaim was very clear about writing the Torah in Ktav Beit Yosef and Tefillins in Ktav Ari.

So if you are Hassidic, you should order a Ktav Arizal Tefillin. But if you one day hire a sofer to write you a Torah, make sure you ask your Rebbe if you should use Ktav Ari or Beit Yosef. Anyways, it's easy to identify an Arizal ktav - the Chet and Shins look like this:

On top of all this mess there's the Chabad Ktav, introduced by the Alter Rebbe. I heard from a fellow Chabad scribe that the Alter Rebbe once said that when Mashiach comes this will be the main Ktav, but the fact is that the Chabad Ktav is the least popular of all the four versions of the Ktav Ashurit. This Ktav is very similar to the Ktav Arizal, but you can identify it by the exquisite Lamed and Peh:

From left to right: Sephardi, Beit Yosef, Arizal and Chabad.
Posted by YK at 5:09 PM 19 comments: