This cute story is also from this wednesday's "DafDigest"

There once was an elderly man, one of the chassidim of Pzhisha, who was exceptionally proud of his special tefillin which he had worn all the years, from his youth.  He had received this expensive pair of tefillin from an expert sofer at that time, and he had the tefillin checked regularly to ensure that the letters and parchment remained in perfect condition.  Now, in his old age, he once again arranged for them to be looked over by an expert sofer.  As he scanned the parchment to verify its condition, the sofer was shocked and horrified as he suddenly noticed that one of the words was misspelled, in a manner which had clearly existed from the time the tefillin were originally written, many years earlier.  He sadly informed the old man of his finding, and that unfortunately, this special pair of tefillin was never kosher.  The owner, who had prided himself in his fulfillment of the mitzvah of tefillin in such a beautiful manner had, in fact, never fulfilled the mitzvah even once in his entire life!

Upon hearing this devastating news, the old and frail man began to dance and sing.  The family was flabbergasted in noticing this strange response to what should have been bad news.  Had he gone mad due to the shock?  Why was he dancing?  The elderly man realized that his family was wondering about his reaction, and he reassured them that he was still in control of his faculties.  He explained, "Of course, I am very disappointed and heartbroken about what I have now heard.  I have to think hard about why
this has happened to me, and I must make certain conclusions about why Hashem has led me until this point to not have fulfilled the mitzvah of tefillin until now, although I have always treasured this mitzvah.  Yet, I am
comforted that a miracle has occurred, and that I still have an opportunity to do something about it now.  I will still merit to put on kosher tefillin before I leave this world, and for this I am appreciative.

The Gemara says that tefillin can only be worn by someone who has a clean body, like Elisha Bal Kenafayim. The Gemara proceeds to relate how Elisha wore tefillin despite the decree that Jews were not
allowed to wear tefillin. When an officer suspected that he was wearing tefillin and pursued him, Elisha quickly put them into his hands, finding that they had miraculously turned into the wings of a dove.
Upon questioning, he said that he was merely carrying dove wings.

When his claim was verified, he was released. How is this story a proof that tefillin need to be worn with a clean body?  What does it have to do with having a clean body?

The Klausenberger Rebbe zt”l (quoted in Margaliyos Hashas) prefaced his answer by quoting the opinion of Rabeinu Yonah.  Rabeinu Yonah understands that someone who is known to be an extremely pious person must sacrifice his life to keep even seemingly minor mitzvos at a time when there is persecution against those who keep mitzvos. Elisha was such a person, and he therefore continued wearing tefillin. Why, then, did he not give up his life when the officer saw him?

The Klausenberger Rebbe answers that when Elisha saw the officer, he was so scared that he felt his body was going to become unfit to wear tefillin. He immediately realized that in such a situation it was
now prohibited for him to wear tefillin. Being that it was now prohibited for him to wear tefillin, he was no longer allowed to give up his life at this time for the mitvza of tefillin.  He therefore started to run
away from the officer. While Elisha had these thoughts, Hashem performed a miracle that the tefillin on Elisha’s head should immediately become dove wings.  Why was the miracle performed in such a fashion?  It must be, the Klausenberger Rebbe answered, because it was forbidden for the Tzadik to wear tefillin with an unclean body.  Hashem therefore turned the tefillin into dove wings, in order that Elisha should not
wear tefillin while having an unclean body.  This is the Gemara’s proof from Elisha that one is not supposed to wear tefillin while having an unclean body.


[In order to illustrate the profound seriousness and holiness associated with the donning of tefillin as it was practiced in times of old, mention should be made of a remarkable and intriguing statement written by
Rav Meir HaMi’eli of Narbonne. He references a Yerushalmi that there were Amoraim that refrained from donning tefillin each day due to the great care and attention that tefillin require. These Rabbis held that the
concept of a clean body did not apply solely to the physical body, but also to the spirit, such that the soul had to be clean of sins! According to this approach, Rav Meir HaMi’eli interprets our Gemara to teach
that physical uncleanliness, although a necessity, is unacceptable while wearing tefillin, all the more so spiritual uncleanliness can not be accepted. It must be said that this was written in regard to previous generations and has no application today.] 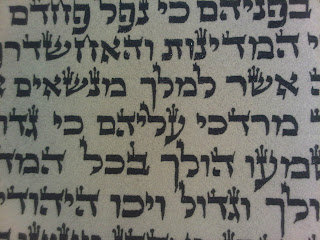 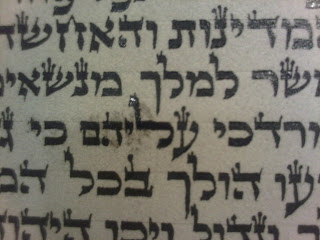 One of my very first works was this 11 lines Megillat Esther. Last Purim I noticed this classic mistake - Lamed that invades de Chaf Sofit, so I now took the time to fix it. I was not in a rush as a Megillat Esther is technically kosher even if it has small mistakes, as long as most of it is Kosher. However our sages teach us that one should avoid keeping scroll with mistakes, so here is how I fix it. The Klaf was really really poor in this part so I had a tough time scrapping and writing again over it, but the result was satisfactory to me.

Update: Aaron Shaffier pointed out in the comment section that it's not enough to fix the Lamed; the Chaf should also be re-written to avoid Chok Tochos. I rechecked this in the Keset Hasofer, which has a Chakira on this topic at the end of the Sefer and concludes indeed that the Chaf should also be fixed. My thanks to Aaron and I will try to post a new picture after the Chaf is fixed. See Keset below: 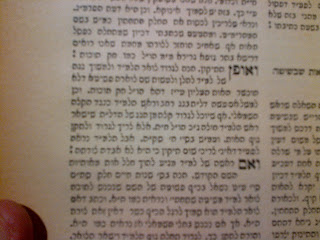