This is a very important topic for all sofrim and I got his permission to put up his shiur on this blog for one week (you must pay to get his weekly shiurim so this was a very big favour), so us sofrim can get a taste of this.


I will eventually put everything he said in writing so I can keep it available here in the blog but I would not miss this chance to hear a Safrut shiur from one of the very best orators out there.

UPDATE: the week has passed and I had to take down the video. But I transcripted the shiur for those who arrived too late:

The Anglo Jewish Press reports that Rabbi Ovadia Yosef’s son, Yaakov Yosef, ruled that most of the Torah Scrolls used by the Israel Defense Forces are pasul, for many reasons. Among them, the brings the argument that there’s a stamp/watermark stating that the scroll is property of the IDF and this sign invalidates the scroll, as it adds words to the bible.

The Tshuvot Beit Avi, from Rabbi Isaac Liebes of the Bronx brings that someone from his city testified that there were numerous robberies of Torah Scrolls and the person asked him if it’s permissible to inprint in the Torah the name of the owner in the back of the scroll, as an Horaat Shaa (temporary permission) since there was no other solution to this problem.

This topic relates to Parshat Behalotcha because in this Parsha, there’s the famous verse “Vayehi Binsoa Aron (...)” and the Talmud in Shabbos 115b says that Hashem made signs (simaniot) before and after this segment and there’s a discussion pertaining the reason behind this unusual anomaly.

Tanna Kama says that this is to show that Veyahi Binsoa wasn’t supposed to be written here in Parshat Bealotcha. It should be rather placed in Parshat Bamidbar, when the Torah discusses how the Jews camped in the desert.

Rebi says that the reason is rather because these segment is a “sefer bifnei atzmo”, a seperate book within the Five Books of Moses. According to this view there are rather Seven Books of Moses! Genesis, Exodus, Vayikra, Bamidbar 1 (before Vayehi), Bamidbar 2 (the segment of Vayehi), Bamidar 3 (after Vayehi) and Devarim.

Says the Talmud, who is Tanna Kama? It’s Rabbi Shimon Ben Gamliel, who says that this segment of Vayehi will in the future come back to its proper place. It is placed here in Bealotcha to separate between two clamities, the first is Vayehi Kemisonenim (the verse following Vayehi) and the second clamity is Vayisu Mehar Hashem, the verse preceding the Vayehi Binsoa Aron segment.

Until here is the Talmud. But what are these signs (simaniot)? In our modern scrolls we have inverted Nuns before and after Veyahi Binsoa Aron (see below) but not everyone agrees that these are what the Simaniot are supposed to be.

The Teshuvot Maharshal (see the original here) was asked how this signs should look like - should it be inverted Nuns? Says the Maharshal that he found an old version of the Rashi which says that the signs brought in the Talmud are in fact the inverted Nuns. However he doesn’t understands how can we add words to the Torah by adding two inverted Nuns - after all if you add or omit any letter of the Torah, the scroll is invalid! “I’ve found in the Torah of Rabbi Tudros, an esteemed Rabbi, that instead of adding independent inverted Nuns he modified Nun located in the words Vayehi biNsoa and MisoNenim and inverted them, thus not adding any extra letter in the Torah” (see below a pic of a scroll that follows this opinion. Photo Credit: Lion of Zion) 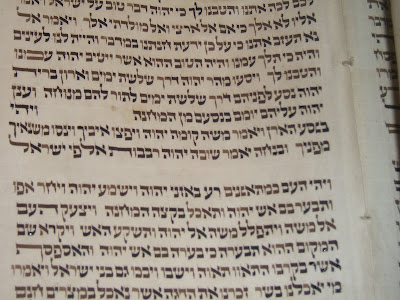 Says the Maharshal that this solution is also complicated because by modifying the words Binsoa and Misonenim, you are causing what is called a “Shinui Ott”, which also invalidates the scroll.

The Maharshal concludes that he changed his mind after he saw that the Zohar brings that independent Nuns should be added before and after Vayehi Binsoa. However, the Maharshal would invalidate a watermark like the one used by the IDF since there’s no grounds to permit that. The inverted Nuns are an exception recorded by the Zohar, and therefore the only extraneous letter permitted in the whole Torah.

The Noda Biyuda of Prague (M. Kama Yoreh Deia Ayin Daled) takes strong issue with this Maharshal. He says that adding letters to the Torah is only a psul if the added letter in the actual text of the Torah, however if someone adds a letter in between the parshiot or in the top of bottom of the Torah, that’s not an intermission and not a psul. However to do like Rabbi Tudros and invert the Nun of one of the actual words of the Torah that a problem as it changes the look of the word, causing a psul. Additionally, Rabbi Tudros strategy is not a sign before an after the parsha of Binsoa, it’s rather a sign within the parsha since he modified the third letter of BiNsoa and that’s not what the Talmud meant to say. Therefore, it’s a much safer bet to use independent inverted Nuns before and after Binsoa (as we do today in our modern scrolls). And he criticizes the Maharsha for bringing the Zohar as a proof, for we cannot decide Halacha based solely in the hidden text of the Zohar (similarly, the Noda Biyuda was famously against saying Leshem Yichud before Mitzvot as brought in the Zohar).

So adding names or watermarks to the Torah scroll is permissible according to the Noda Biyuda. Practical halacha is that if you add a sign, you should do it in the back of the Torah because all agree that there’s no psul in that.

Rabbi Moshe Feinstein was asked if one should fix Torah Scrolls that have the Nuns of Binsoa and Misonenim modified, a la Rabbi Tudros and Maharshal, and rules that these scrolls are Kosher Bedieved but that you should fix it.


See below other versions of the inverted Nun brought by the great Torah Shelema from Rabbi Kasher. 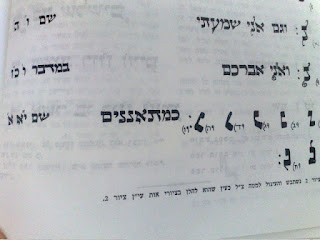 Hi, YK it says that I dont have premission to access this video.

I fixed the permissions - try again and let me know if it goes.

i missed seeing the video but thanks for posting the transcript.